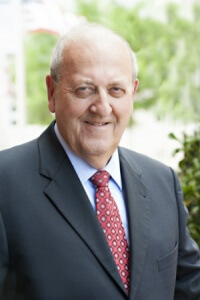 Ray C. Boll is the Broker for Rj BOLL Realty, Ltd. During his 44 years’ experience in commercial real estate, he has been a leader in the industry, running several of the area’s top brokerage companies, and receiving the highest designations and awards. Since 1978, he has been the Broker for prominent developers, and now with his own firm. His passion for real estate, ethical representation, and commitment to excellence is undeniable.
Ray’s countless accomplishments through the years have facilitated his current success in commercial real estate. Ray started his real estate career in Cleveland, Ohio as a salesperson with Craig, Lang, Free & Smyth in 1970. He then moved back to his hometown, Columbus, Ohio, with the Sequin Thomas Company, and to John W. Galbreath Co. focusing on downtown “Class A” office buildings. In 1978, Ray received his Broker’s license and started the real estate division with Ruscilli Realty. Vantage Companies, out of Dallas, Texas, came to Columbus in the mid-1980s, and Ray became the Broker for one of the area’s major developers. This developer built Crosswoods Center Office Park, Westbelt and Westbelt West Business Industrial Parks. Since 1996, Ray has run his own full service commercial real estate firm. He has also successfully developed ten medical office buildings valued at $17.5 million dollars. He has mentored numerous salespeople over the years and is considered an expert in all areas of commercial real estate.

Education & Credentials
Otterbein College, Westerville, OH; Bachelor of Science: Business Administration & Economics
Member, Society of Industrial and Office Realtors (SIOR) since 1983
Licensed as a Real Estate Broker in the State of Ohio since 1978
Member, Columbus Realtors and National Board of Realtors since 1975
Awards
One, Five and Twenty-Five “Million Dollar Club Award” – Columbus Board of Realtors
ProLogis “Most Deals Award” 2006, 2010, 2011 & 2012
ProLogis National Broker of the Month, July 2006